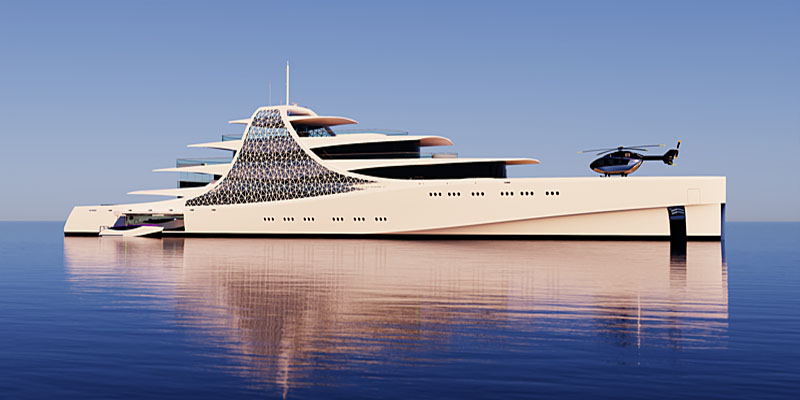 Australian design studio Nick Stark Design has unveiled a 94-meter concept tentatively named Project Crystal. It was named after the main feature of the exterior – the “crystal lattice” that glows in the dark.

“The main idea was to create a festive and chic atmosphere in design. The lines of the superstructure tend upward and then merge with the transverse outlines, while simultaneously riveting the eye to our surroundings: to people, the community and the environment, ”says Nick Stark, studio founder and naval architect.

The superyacht has a deck width of 13 meters and a tonnage of 2500 GT, and her highlight will be a helipad on the bow deck and several swimming pools. The first is the large pool aft of the main deck, the second is the Jacuzzi on the owner’s private deck and another hydromassage pool on the sundeck. By the way, the latter has a glass bottom, which allows light to enter the owner’s lounge and creates an atrium effect in this room. There is also ample storage for tenders on board.

“A sense of privacy is at the heart of the superyacht’s design — we aimed to create a safe and relaxing space that is both visually pleasing and comfortable for those on board,” explains Stark.

In the development of Project Crystal, environmental considerations were emphasized. The yacht is equipped with variable-pitch propellers and a well-tuned hull to maximize fuel efficiency. This is combined with the latest hybrid powertrain and glazing to help make the best use of resources. In addition, the ship’s hull has been designed to optimize seaworthiness. Instead of a traditional radar ball mast, it has a sleek antenna that perfectly matches its outer lines.

Since founding the studio of the same name two decades ago, Stark has developed a number of concepts that span the spectrum from hybrid party yachts to luxury dayboats. However, Project Crystal is the most dazzling project and it looks like it might outshine others.