MainNewsRiva first received a hardtop version for the Open line 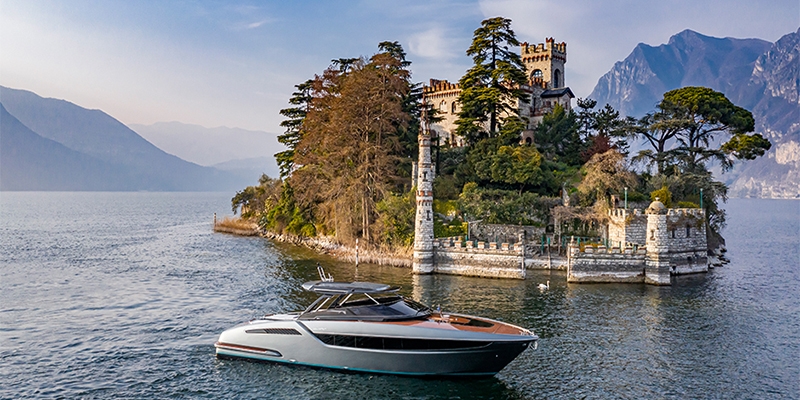 In 2019 Riva Dolceriva introduced the 15-meter Open class cruiser. It was distinguished not only by its original exterior, but also by completely new planning solutions. Its timeless style has not lost its luster, and now the shipyard hopes that the new boat will expand the circle of admirers of the brand through a number of characteristics. 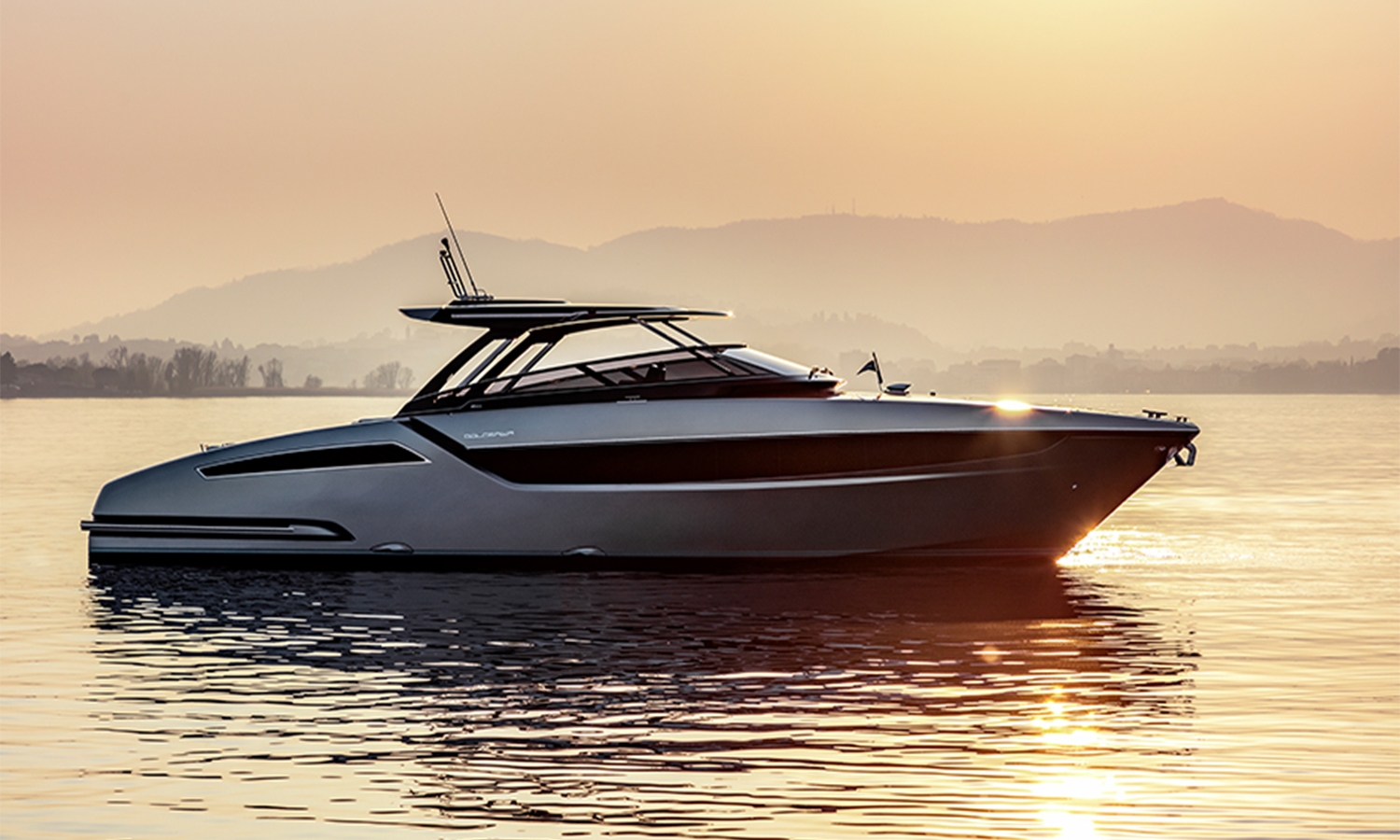 One of the strengths of the updated Riva Dolceriva is the ability to stop worrying about the weather. The novelty has received a hardtop that is able to protect outdoor recreation areas from the sun or rain. It is designed in such a way that the canopy fully protects the entire cockpit and helm. Also, the designers took care of the possibility of fully covering all this space with the help of transparent awnings on both sides, as well as from the bow and stern. An air conditioning system can also be installed inside to create a closed space suitable for relaxing even in hot weather.

The main body of the hardtop is made of composite materials – carbon and vinyl, which allows for light weight and durability. It also features steel inserts that not only increase the rigidity of the entire top, but also preserve the sporty character and personality of Dolceriva.

Officina Italiana Design has succeeded in laying the foundation for the modern philosophy of the Riva style. Namely, with this boat, the studio perfectly optimized the side space, but at the same time preserved the brand’s heritage with great respect and awe. 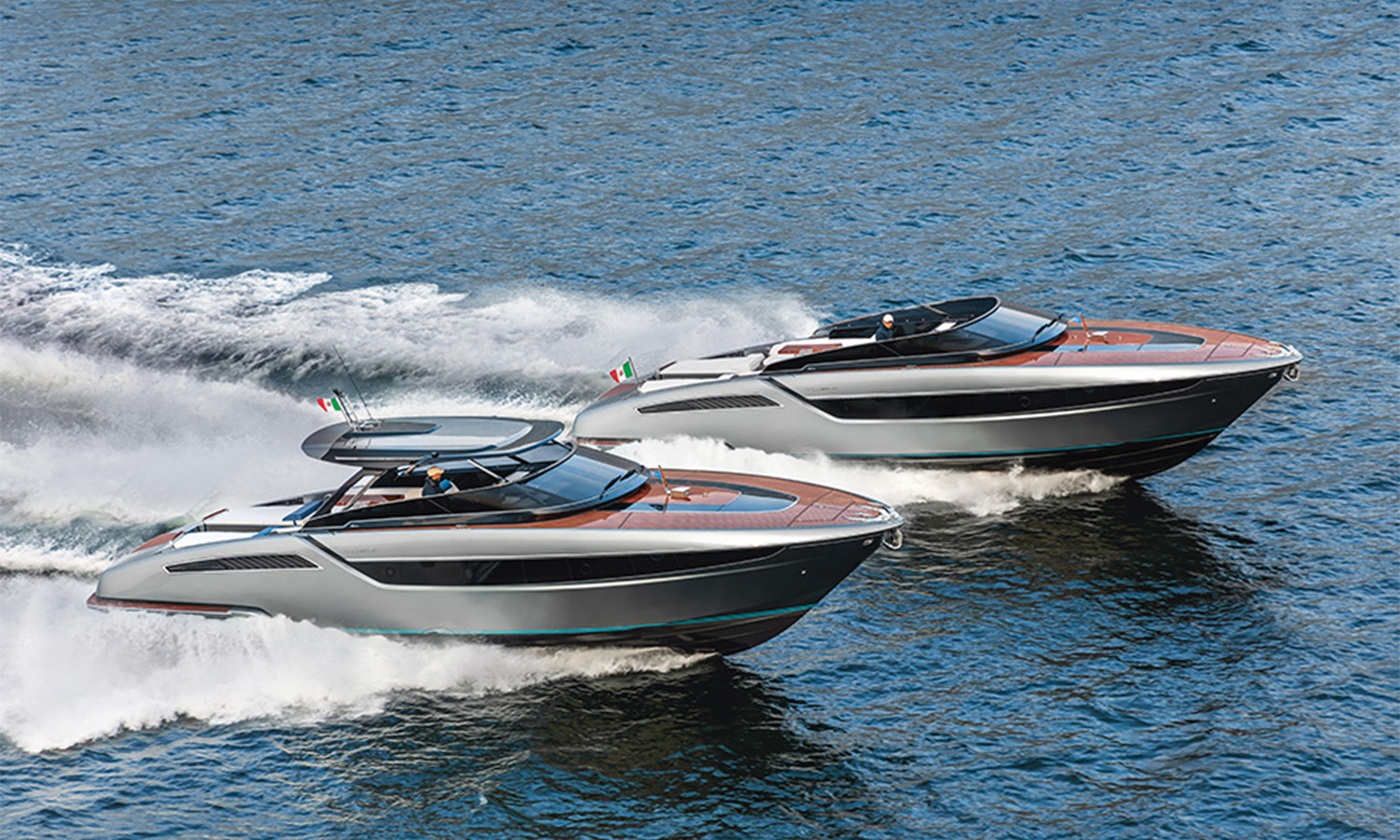 A slender line of portholes glides across the silver hull, as if someone had drawn a graceful curl to the deck with a black pencil. This fascinating stylistic decision resulted in a non-standard visual connection of the hull to the deck line. And the reverse curvature windshield has become the hallmark of Riva. The Dolceriva bow deck is finished in mahogany with twenty coats of lacquer. Among the polished mooring equipment, there is a window that floods the cabin on the lower deck with natural sunlight. 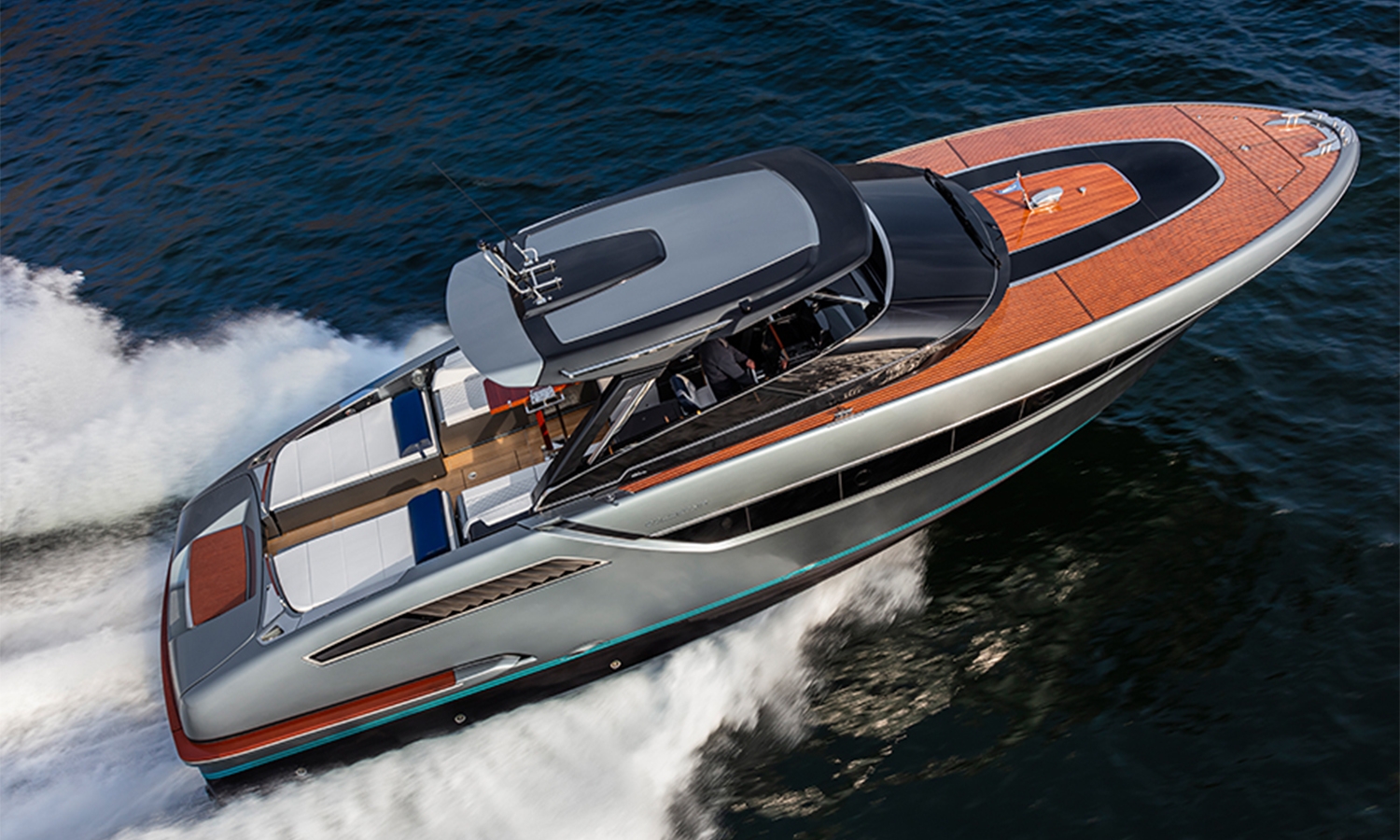 At the stern, a unique folding section system has been developed. When closed, it hides the bench, and when open, you can use the built-in mahogany steps. Behind two sun decks, separated by a central aisle, there is a cockpit with a dining area with two large sofas.

The lower deck may have a two-cabin layout with a master suite in the bow and a suite with separate berths aft. Also, the space of the standard cabin can be used as a crew cabin with its own entrance from the bathing platform or as an additional garage. 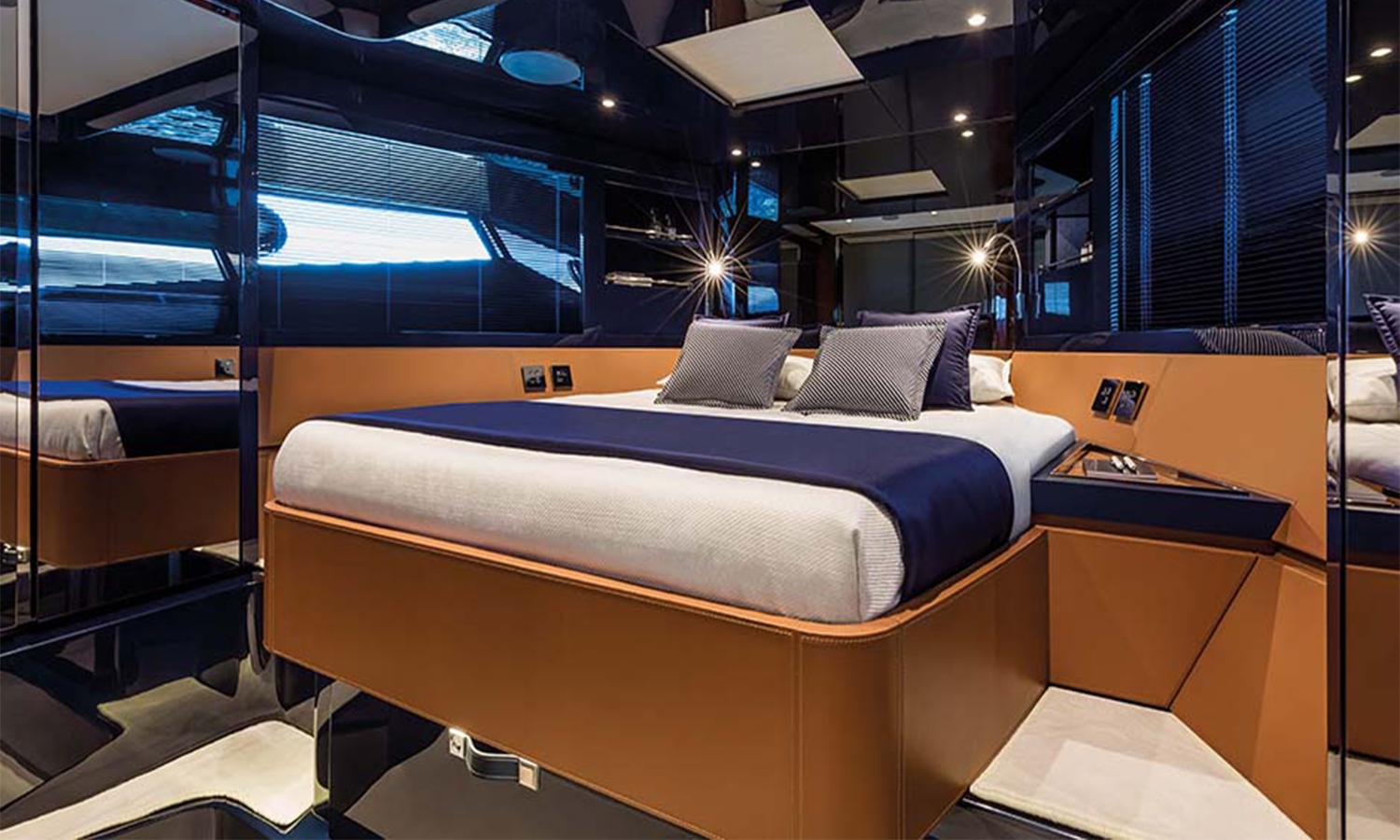 The Riva Dolceriva is powered by a V-drive with two Volvo Penta D13 engines, each with 1,000 hp. In terms of performance, the model can reach a top speed of 40 knots with a cruising speed of 35 knots. The helm station is equipped with one 12 “touchscreen and an additional 16” touchscreen with Garmin monitoring system. Seakeeper joystick and gyro stabilizer are also available upon request. 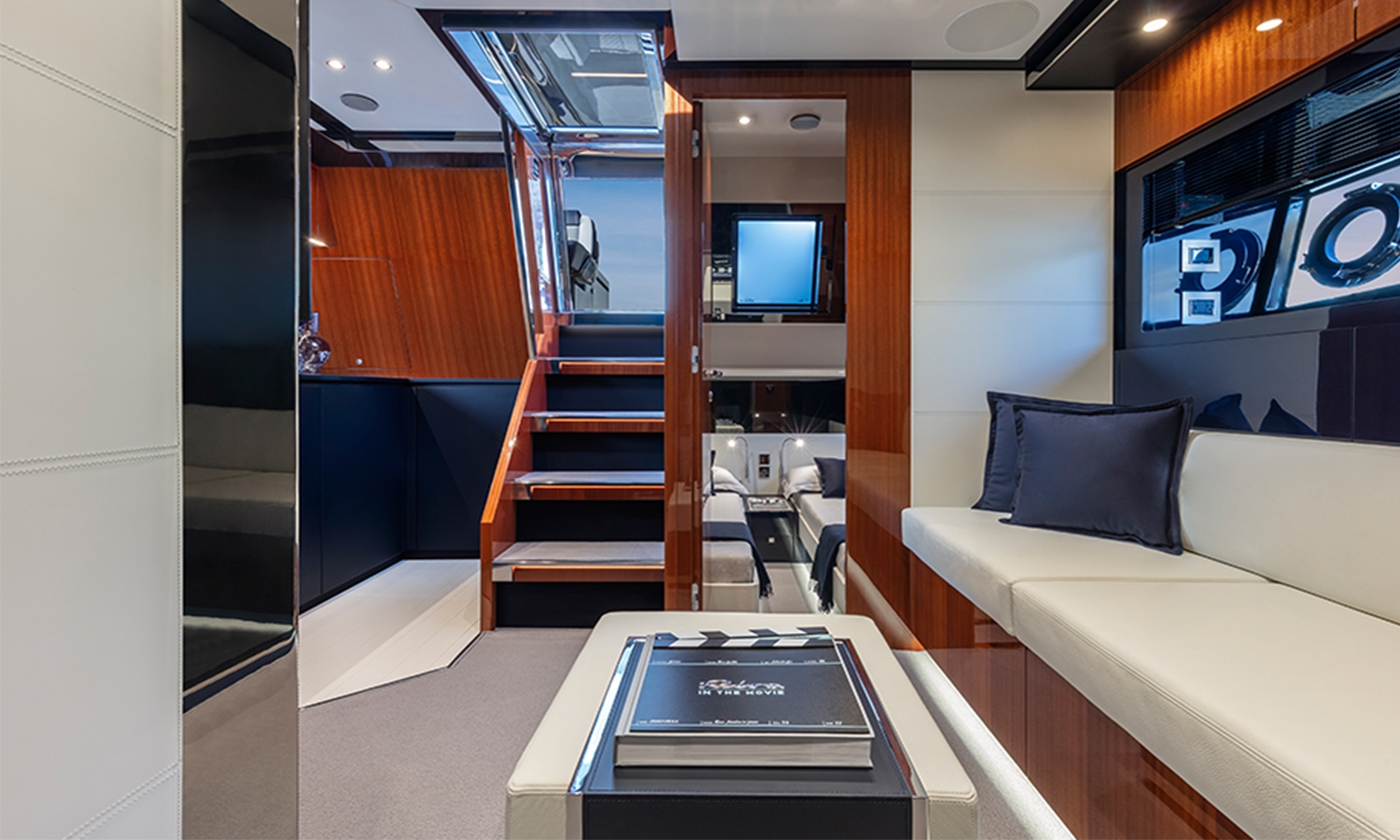 The first Dolceriva hardtop hull will be unveiled in Bridgeport on June 16 and 17 at the Steelpointe Yacht & Charter Show, where it will be possible to board and conduct sea trials.