MainNewsTo be or not to be to the pool on a yacht: problems, expectations, reality 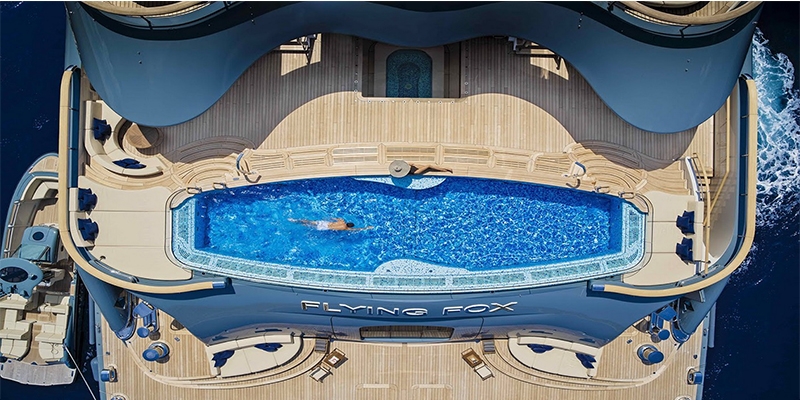 Fulfilling dreams and wishes, designers continue innovating to create more luxurious, comfortable and impressive pools on  superyachts’ board. But is this all-”inclusive jigsaw” puzzle so easy to put together if you decide to include the refreshing feature on your boat trip? Let’s figure it out.

If you want to have fun by the pool, why not to do it on your own yacht? No sharks, rays, dangerous jellyfish – there is such an opportunity, and on luxury yachts it is always included in the kit. And if ten years ago, yacht pools were limited by engineering capabilities, today they are limited only by the imagination of the owner or designer. 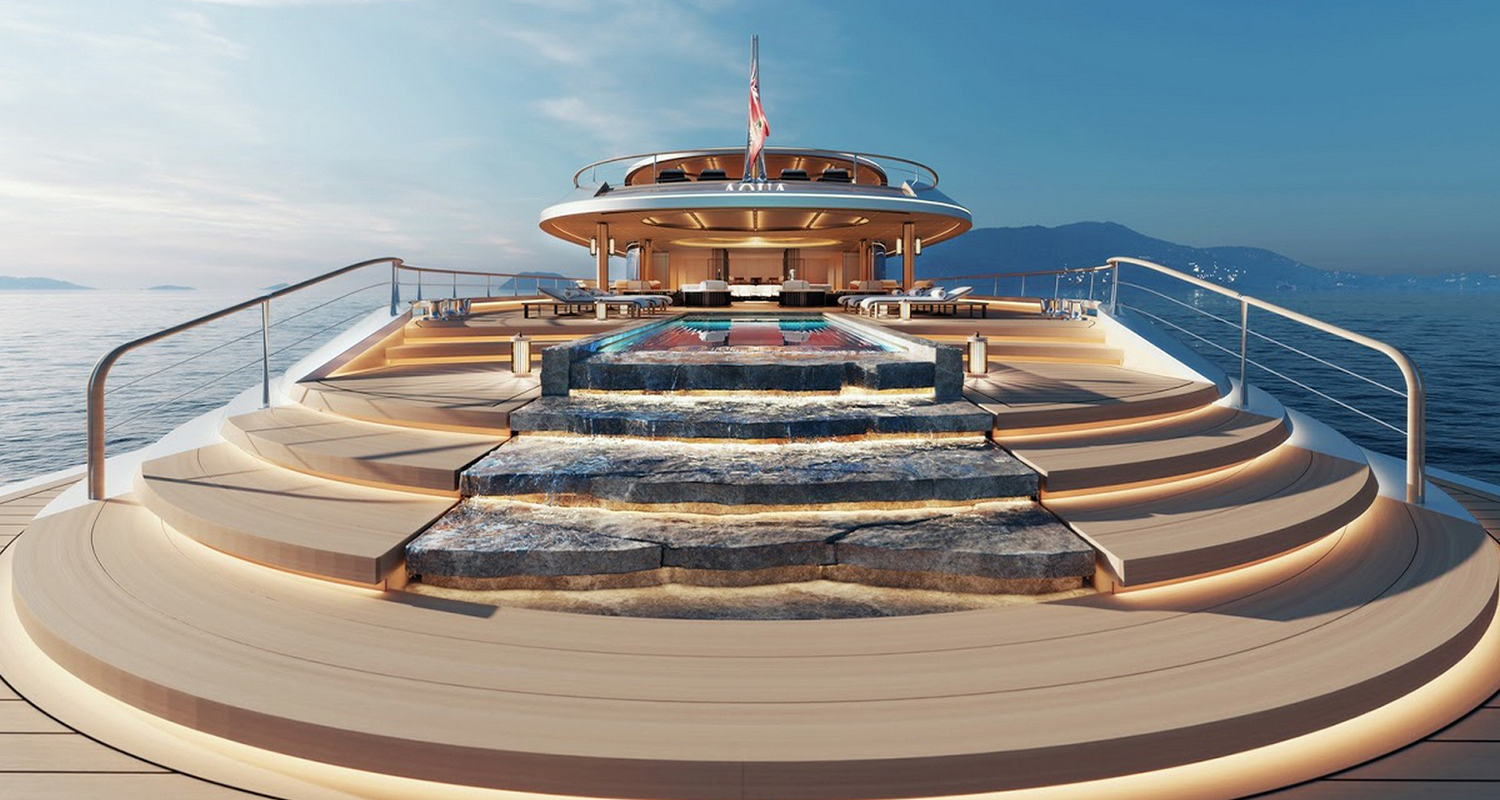 Pools, waterfalls and aquariums: the richness of luxury yachts

The yacht pool is basically a place to relax, chat with friends and guests, admire the ocean or the beautiful island lagoon around.

But just nowadays you won’t surprise anyone with swimming pools. Therefore, a lot of people now want waterfalls, water cascades and whole attractions. These are all additional challenges for engineers and designers.

For example, the Dutch superyacht manufacturer Oceanco almost always prefers to install a variety of water features and attractions for its exclusive clients – these range from a simple jacuzzi to a pool with a waterfall and even a pool with a built-in aquarium.

Back in 2007, Oceanco were among the first to install an infinity pool that reached the aft deck of the 82-meter Alfa Nero. This allowed yacht owners and guests to feel connected to the ocean while on holiday. But the “highlight” was the engineering development, which allowed, if necessary, to raise the base of the pool to floor level, turning it into an entertainment area, or even into a helipad. 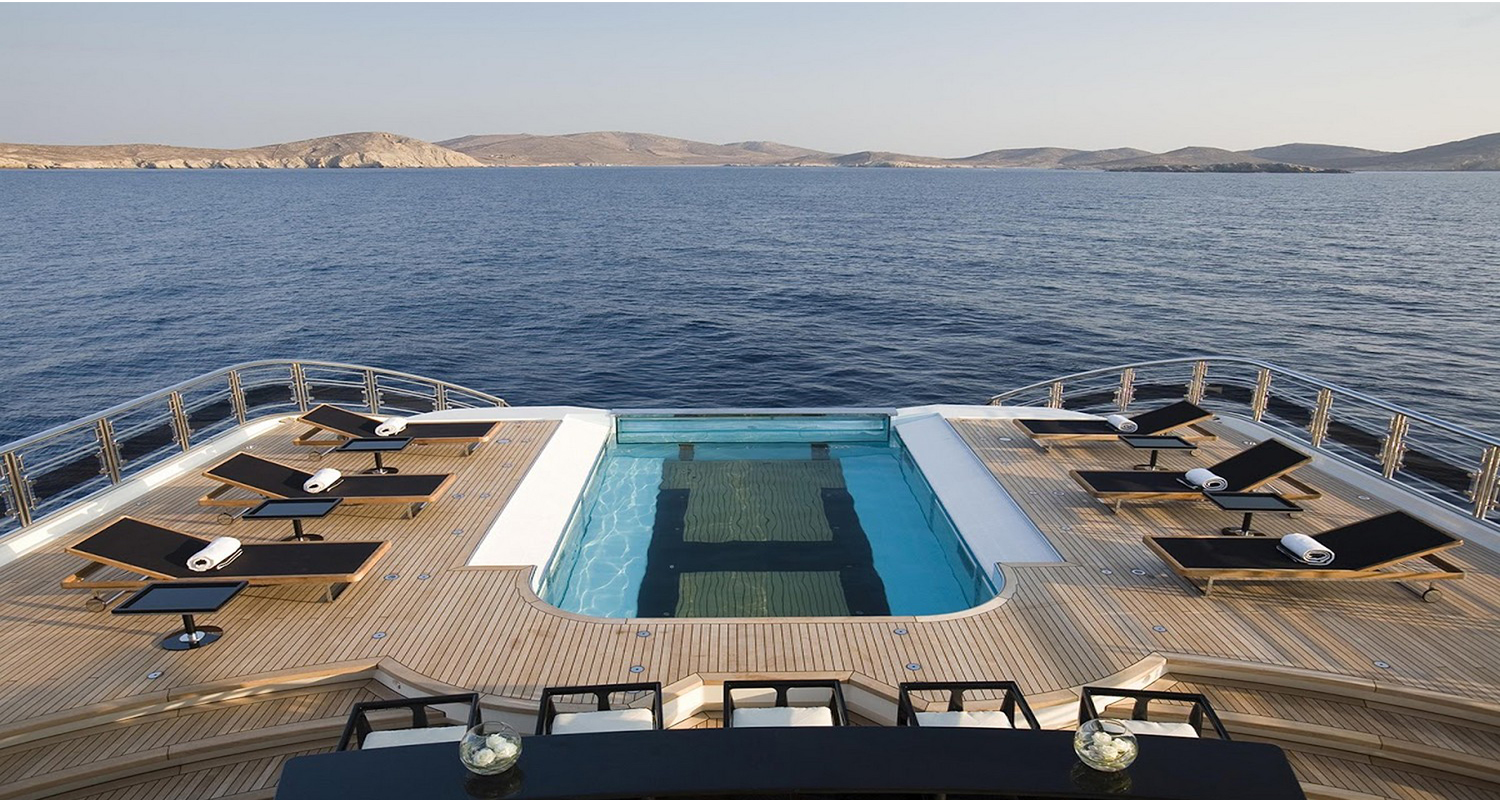 Another nautical attraction is the CRN yacht ‘Latona’, which will surely surprise even the most sophisticated amateurs. The reason for this is the spectacular garage pool! The built bowl is used as a kind of tender harbor, where you can moor with guests and comfortably climb aboard the ‘Latona’. And when the weather makes it difficult to enjoy outdoor activities, the tender leaves the garage. Not only does this innovation look very sophisticated thanks to the turquoise mosaic walls, but from a technical point of view, this solution significantly saves space. 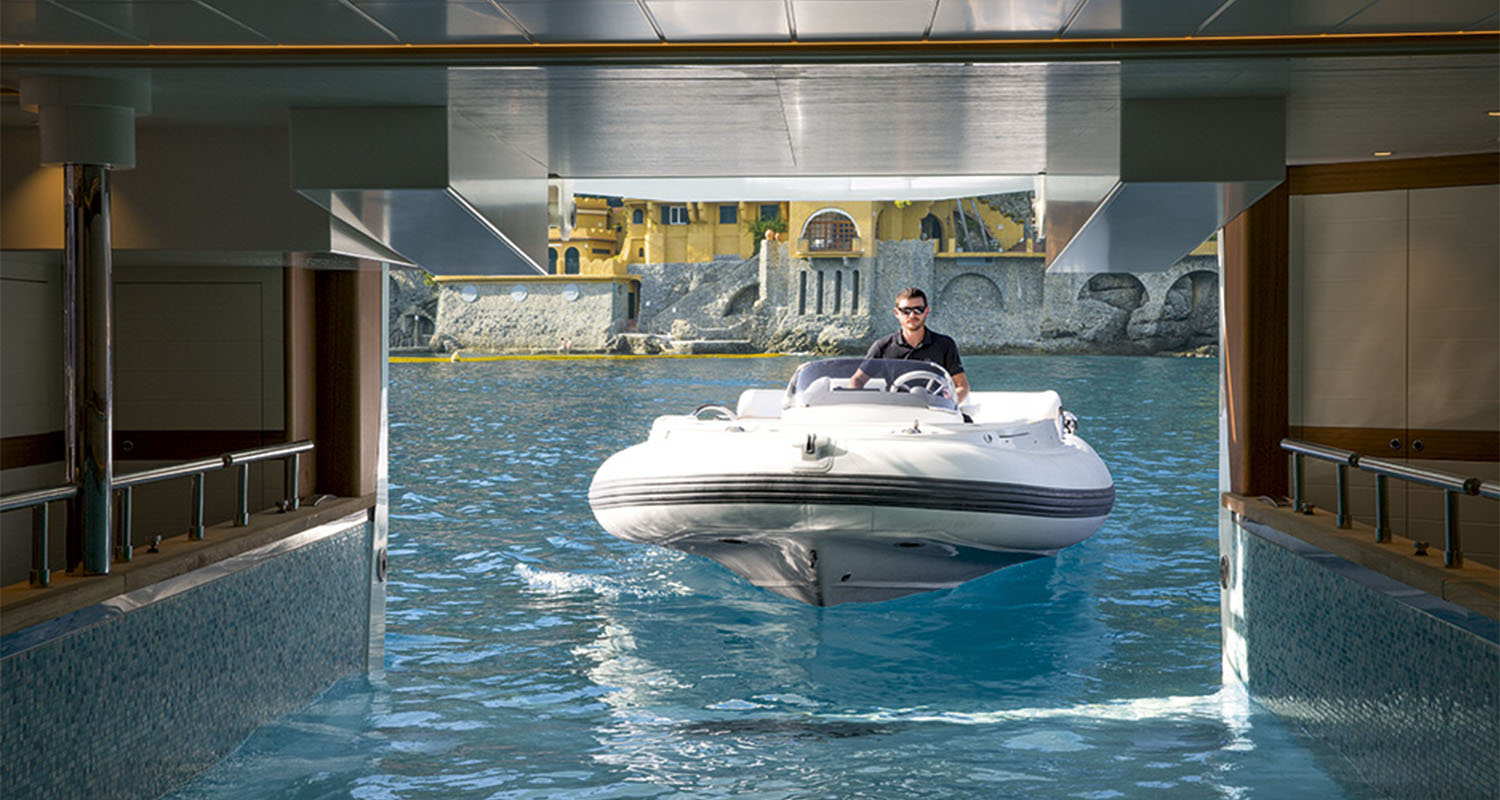 But the largest swimming pool in the world with a length of 25 meters is on the 156-meter yacht Dilbar. It is twice the pool size on Flying Fox, also a Lürssen yacht that many consider to be the ultimate superyacht. The pool at Dilbar is semi-Olympic, and engineers had to work hard to design a structure that can hold 180 cubic meters of water. It was not so easy to “trick” the laws of physics to keep all this five stars proudly afloat. 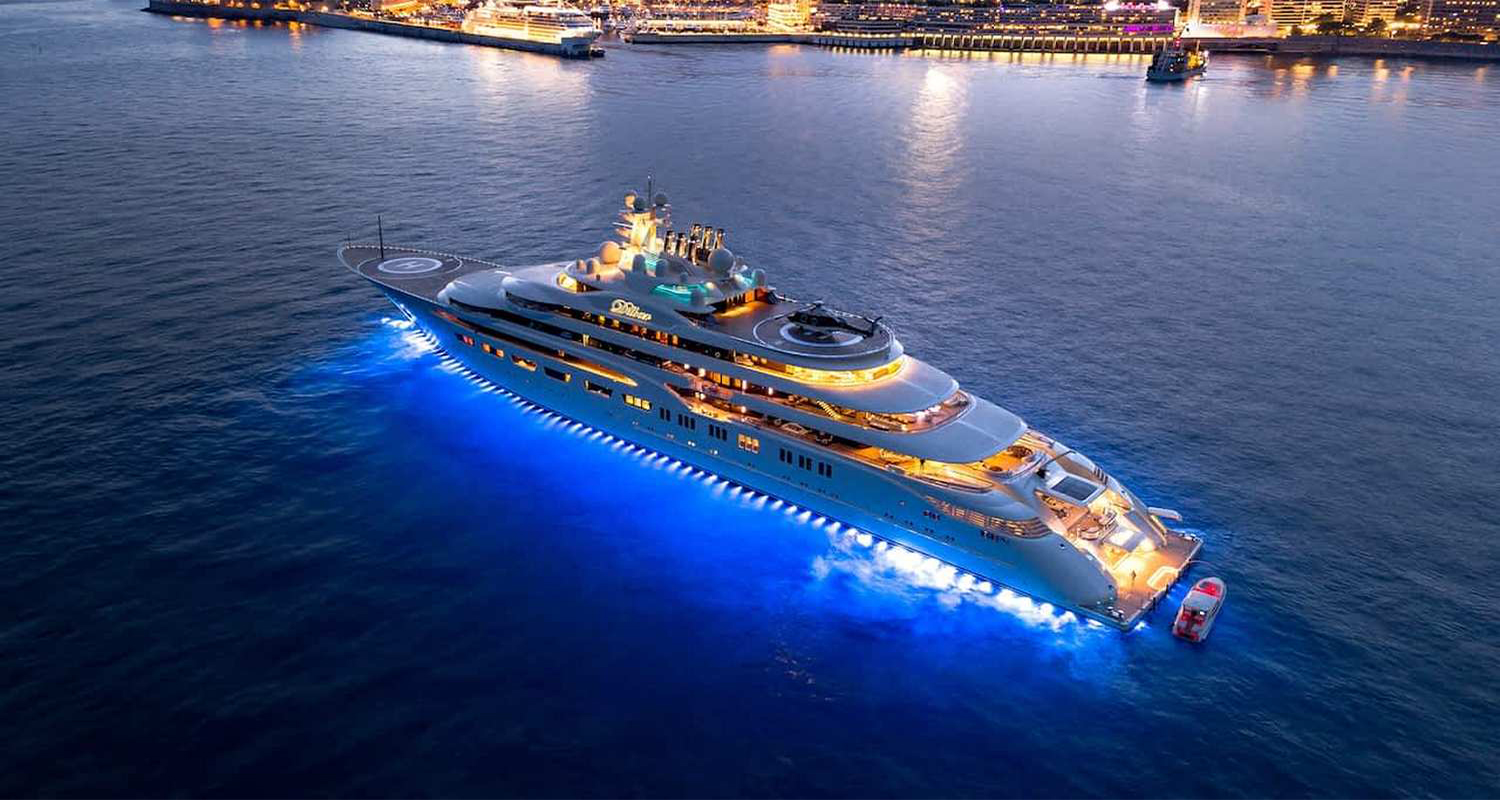 Fly in a barrel of rum: the laws of physics on guard

Pools, waterfalls, fountains, aquariums and jacuzzis on yachts – it sounds and looks great. But if you delve into the technical features, then the process of installing any water object on a yacht is much more complicated than it seems at first glance, and is fraught with many problems. 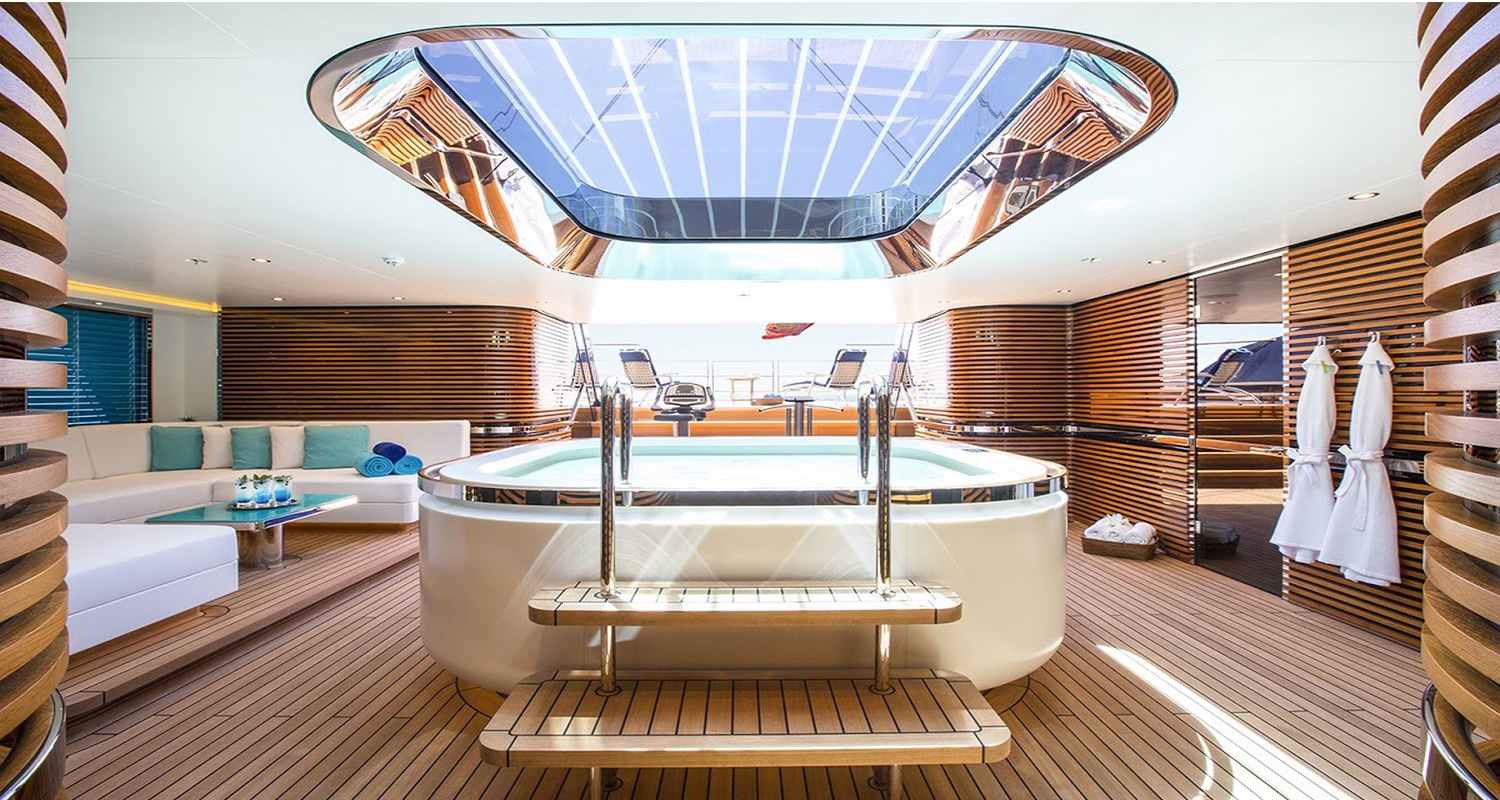 Since the yacht is designed to move on water, the ability to easily juggle the laws of physics is lost here. The movement of the boat itself creates wave impulses in the pools on board. And they are difficult to contain, even in the most calm cruising conditions.

To address this age-old problem aboard the 80-meter Golden Odyssey, engineer Martin Francis developed and pioneered a wave impulse suppression system. It is based on an interlocking anti-roll system consisting of interconnected water reservoirs used to stabilize waves. Water flows from one reservoir to another, controlled in such a way as to extinguish the resulting heel. The wave is “caught” at the edge of the pool in the collecting tank and “released” back into the pool, dampening the yacht’s movement.

One cubic meter of water weighs a ton and significantly affects the overall stability of the structure. This indicator should be considered during the planning phase of any significant water body on the board of yacht. To prevent the pool from shifting the center of gravity of the boat, it is usually placed on the lower deck next to the stern. But you always need to take into account the shape of the body and not every project has the opportunity to make the depth of the pool the way you want. And if you are not the owner of the 156-meter yacht Dilbar, then you will hardly be able to feel like a swimmer on Olympic distances – the size of the pool directly depends on the length and level of the yacht’s draft.

Pools with a counterflow, with hydromassage, combining a pool and a jacuzzi at the same time – all of this is now available for installation on yachts. A typical solution is to create an infinity pool with a float function.

But if you have an idea to make not only a pool, but also to decorate it with a fountain for showiness, you should think about this. It is not enough just to pump water through a nozzle and rely solely on pressure. It is necessary to take into account the movement of the yacht, which means the strength of the wind. For example, Fluidity Design has introduced a range of jets that are more resistant to ship movement and wind, which can be switched on and off, lifting water vertically into the air and arcing through the pool. The jets built into the bridge above the pool allowed for a rain effect. Nevertheless, even with such devices, it was necessary to resort to additional tricks – to reduce the wave impact and lateral wind force.

Plus, there is always a question of energy consumption. The more “bells and whistles” at the pool, the more expensive. A modest fountain with a dozen vertical nozzles that emit water jets two meters high will require about four times the capacity of an unheated pool measuring 6 by 4.5 meters.

In 1994, engineer Jonathan Quinn Barnett created a 7-meter waterfall aboard a 73-meter vessel. He had to use plexiglass screens and angled the waterfall to minimize splashing. Then the water entered the drainage basin and returned to the top thanks to the circulation pump. The higher the body of water, the more options for the movement of the water droplets. In this regard, it is worth thinking not only about splashes, but also about minimizing the rumble that such a technology will create on a yacht.

In addition to cascading mechanisms, fountains and artificial rivers, you can install quite classic pools of various types on yachts: slider pool, inflatable or glass pools.

An inflatable or floating pool is suitable for small yachts and even cruisers. This is a good budget option that can be installed and deployed in a matter of minutes. 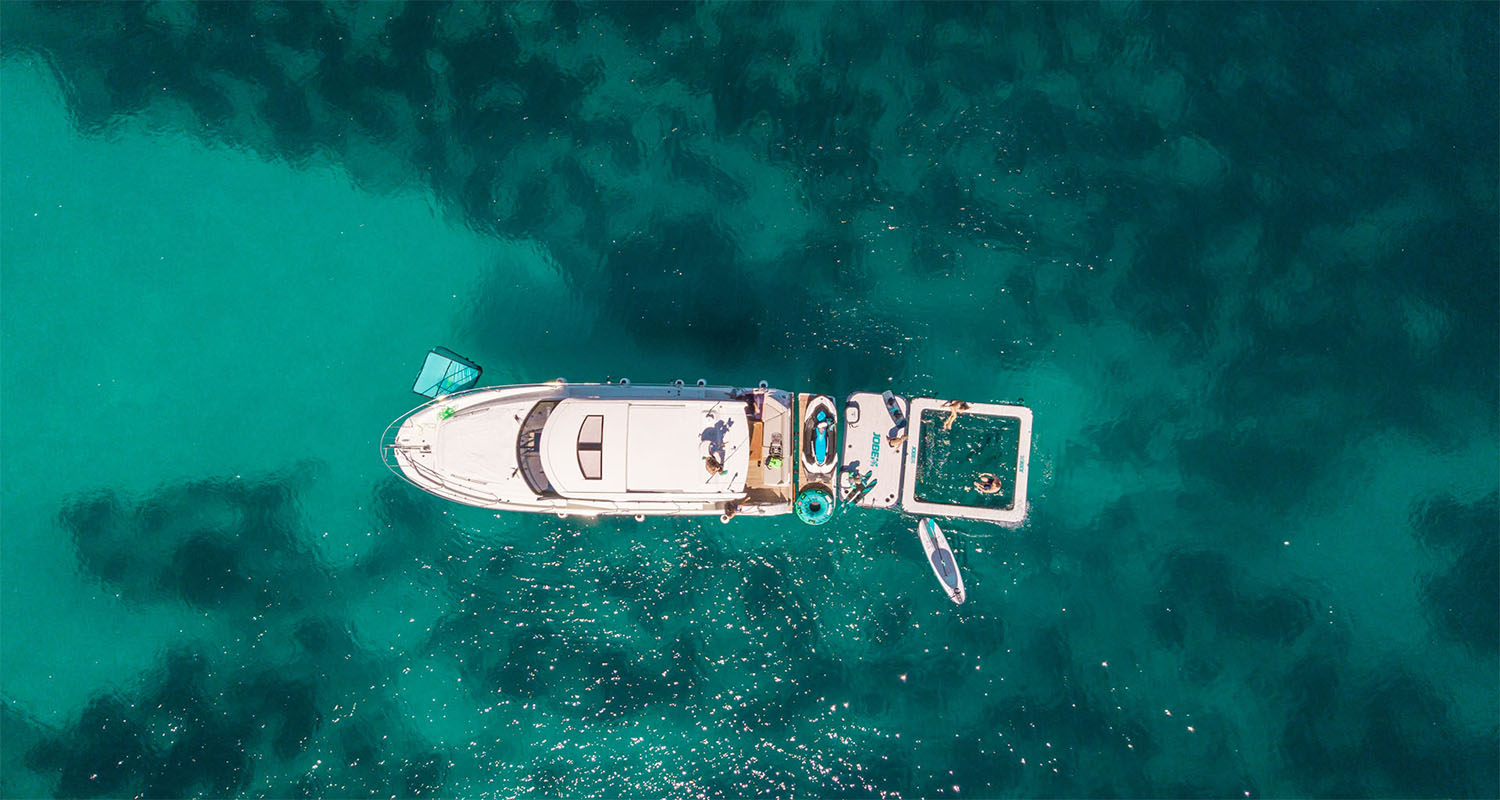 But, for example, a slider pool adorns the Atreides Yacht. The mechanism is designed in such a way that the structure is hidden in the hull of the boat itself. And when needed, at the touch of a button, the pool appears in the water behind the yacht, and visually becomes a harmonious continuation of the vessel. The water is sea water, but bathers are safe from marine life. 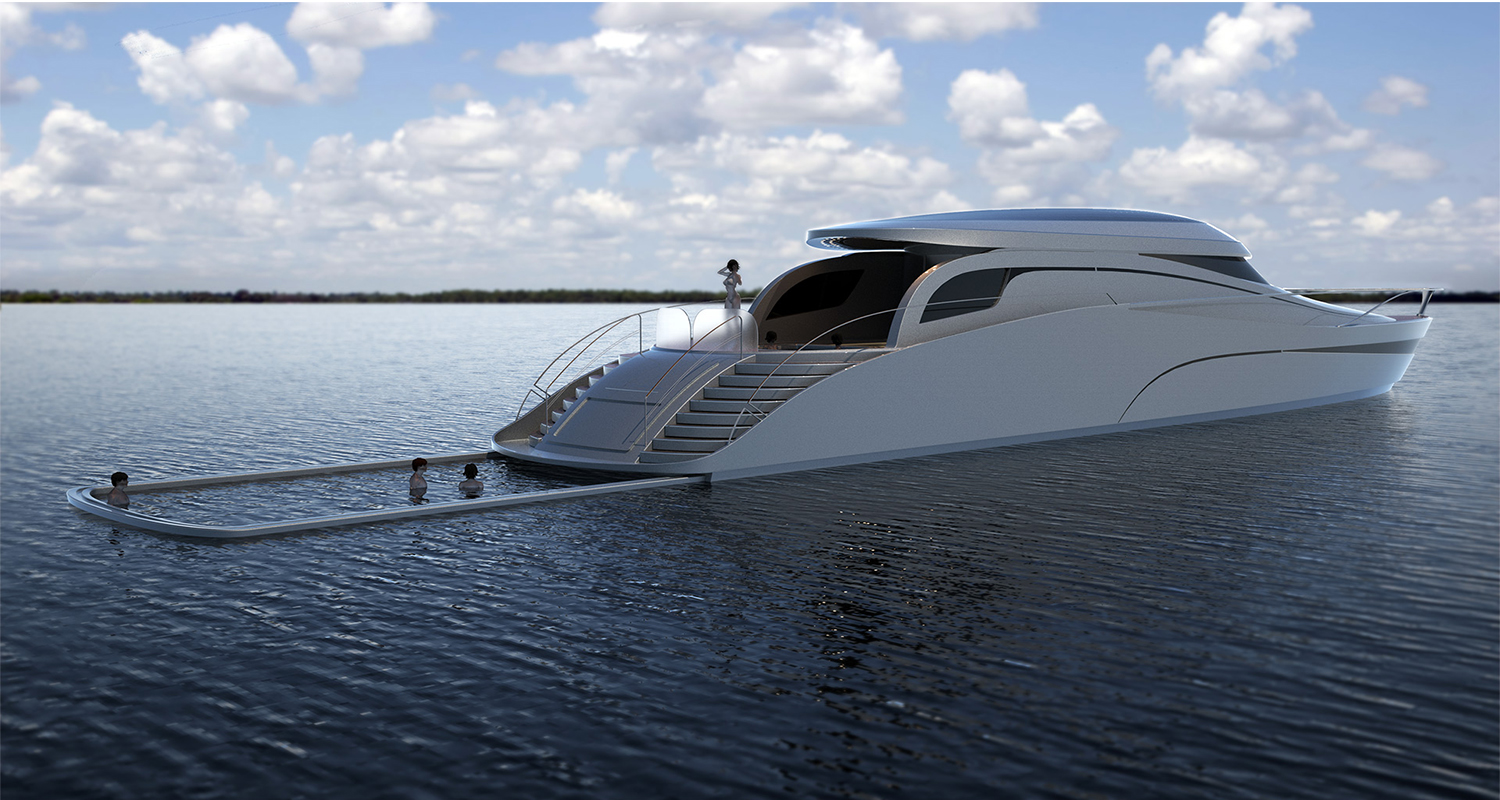 The pool made of high-strength acrylic, or the so-called glass pool, is usually installed on luxury yachts. It can be either collapsible or built-in. Considering the transparency of acrylic 98%, and at the same time its incredible strength, it is possible to make the pool transparent from all sides, including its bottom. And if you initially plan this structure when building a yacht, then a luxurious option would be to make the bottom of the pool – the ceiling of the sleeping cabin. 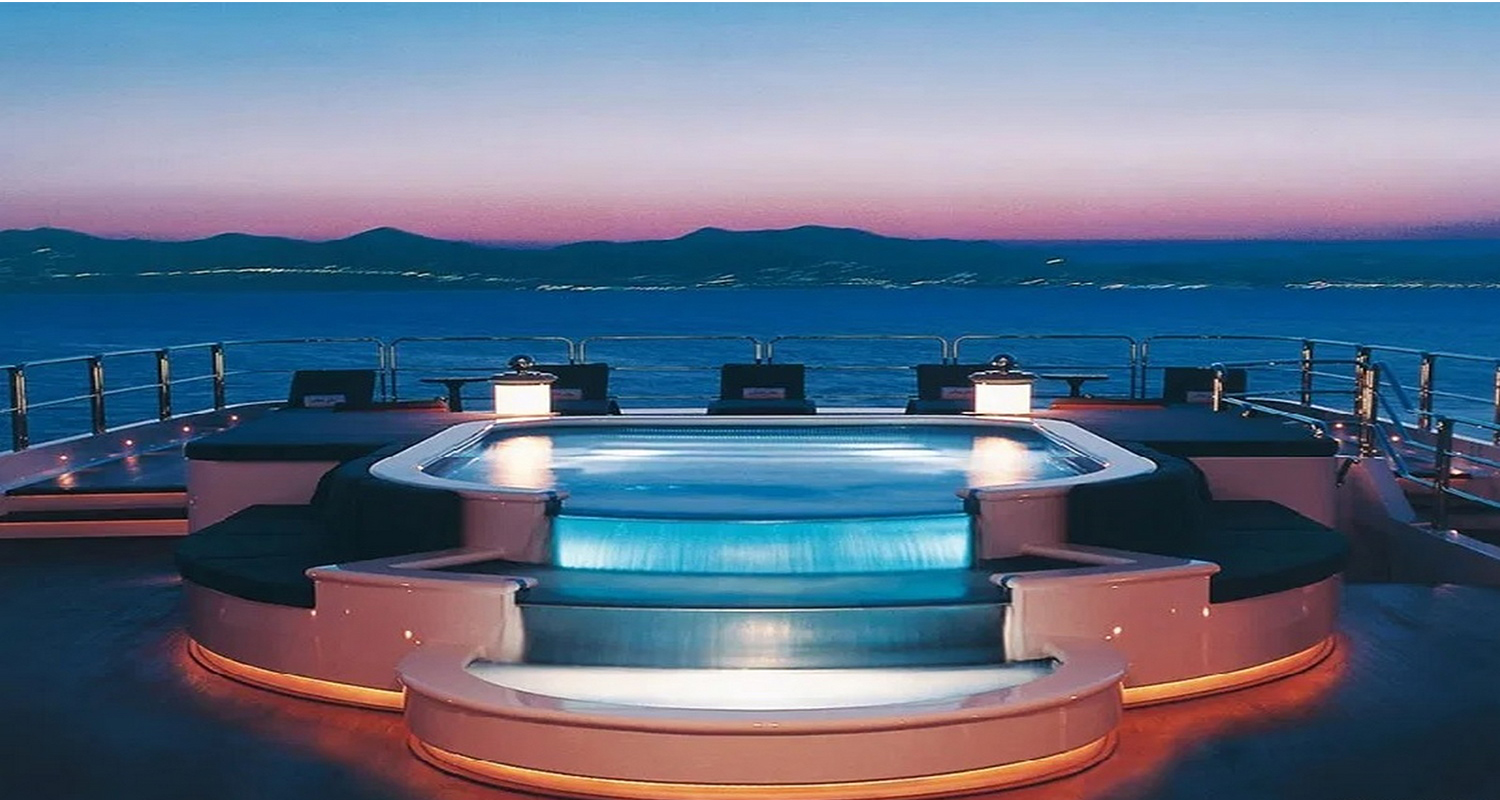 The main principle of modern yacht interiors is that function must support aesthetics, that is why most designers are almost always want to include water features that cause a wow effect. But the installation of any water body on a yacht requires an integrated approach. Well, and … friendly relations with the laws of physics.